This week, share prices of some of the biggest software-as-a-service (SaaS) companies plunged on no news at all. That presented an opportunity: A recently IPO’d cybersecurity company saw shares 33% lower than where they had been three weeks prior.

That company is CrowdStrike (NASDAQ:CRWD). And while it has been growing sales at an impressive pace, that’s not the most exciting part. Instead, investors should really focus on CrowdStrike’s ability to utilize the network effect in a powerful — and underappreciated — way.

But first, let’s cover the basics

Before diving into this powerful network effect, let’s cover the basics of what CrowdStrike does. The company was co-founded by current CEO George Kurtz in 2011. Prior to that, he was the chief technology officer at McAfee. While there, he realized there had to be a better way to stop sophisticated attacks from bringing major corporations to their knees. He wanted his solution to be faster, more efficient, and — most importantly — cloud based.

CrowdStrike’s mission is simple: to protect its customers from breaches. With that in mind, Kurtz developed CrowdStrike to function with two major pieces.

While it may be a crude analogy, think of the Threat Graph as an aircraft carrier. It’s where all of the important stuff is aggregated, but it doesn’t really do any of the combat itself. It’s a home base.

The Agents are like the individual fighter planes. They are the ones executing the plans, and they can use the Threat Graph as a resource when necessary.

CrowdStrike offers 10 different modules — or tools — for customers to choose from. Think of those modules as 10 different types of weapons the fighter plane can have on board. Those tools range from device control to vulnerability management to malware analysis.

We’ll get to the why behind CrowdStrike’s amazing growth in the next section. But first, let’s highlight just how popular the company’s solution has been.

Below is the amount of annual recurring revenue (ARR) CrowdStrike has had on its books at the end of each of the previous 11 quarters. In other words, if CrowdStrike has 10 customers each paying $1 million per year, that’s $10 million in ARR. When the company reports sales, it only reports $2.5 million — as all of that needs to be spread out among the four quarters. But the bottom line is that ARR gives a great view into the health of CrowdStrike and its popularity. 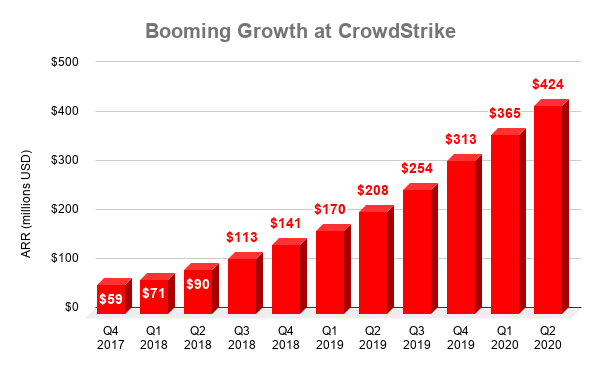 What’s more, this growth is presented on a quarter-by-quarter — not year-over-year — basis. Put it all together, and ARR is growing by 120% per year. The customers on the company roster include big names: 9 of the 20 largest banks and 44 Fortune 100 companies.

Increasingly, these customers are using more and more tools as well. Here’s the total number of clients using 4 or more (out of 10 currently offered) over a similar time frame. 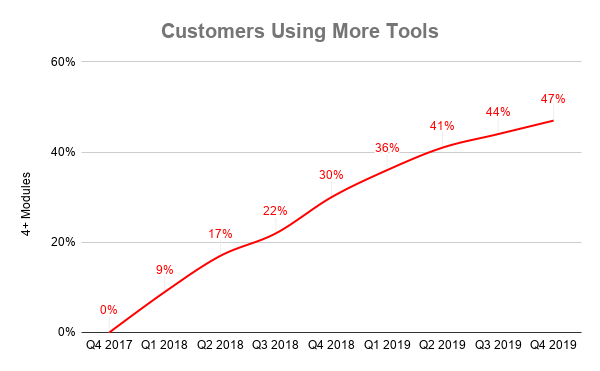 Management also announced in the most recent earnings release that…