As the market continues to hit new highs, some are beginning to question whether we are poised for another tech wreck.

Morgan Stanley recently noted the five biggest companies now dominate the S&P 500 to such a degree that they account for nearly one-fifth of the index’s total market cap. Not even during the dot-com bubble of 2000 was there such disparity — and it raises the prospects of a stock-market collapse when the music finally stops.

The five fingers of growth

Apple (NASDAQ:AAPL), Microsoft (NASDAQ:MSFT), Alphabet (NASDAQ:GOOG)(NASDAQ:GOOGL), Amazon.com (NASDAQ:AMZN), and Facebook (NASDAQ:FB) account for 18% of the stock market and have collectively been the driving force behind the phenomenal bull market that saw the S&P 500 gain 29% in 2019 and end the year at its highest level ever. 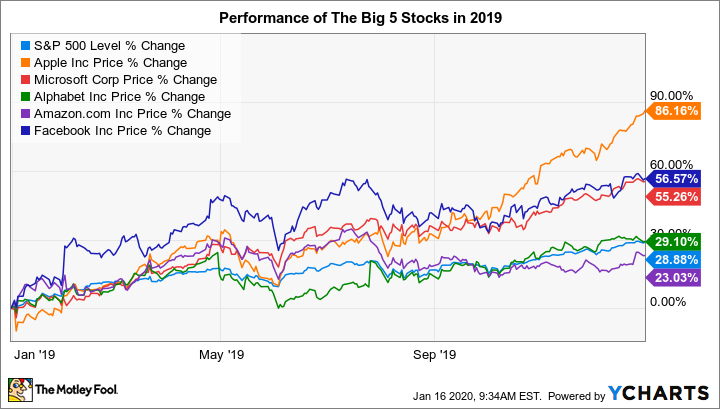 That it’s continued to climb in January is causing analysts to get the jitters about what happens when the tech giants are no longer able to maintain their torrid rate of growth. Morgan Stanley’s Mike Wilson told clients: “A ratio like this is unprecedented, including during the tech bubble. Capital concentration is following corporate inequality like never before.”

And though Wall Street is beginning to get nervous about what it all means, it also doesn’t seem as though the party is about to end anytime soon.

Apple has been the primary force in the market’s gains, carrying a 4.79% weighting in the S&P 500 and generating over 8% of the index’s gains last year all by itself.

Despite the outperformance, analysts still see Apple gaining even more this year and over the first two weeks of 2020, raising their earnings outlook for the current quarter. Where they originally saw fourth-quarter profits coming in at $4.45 per share for the period that ended in December, the consensus is now $4.53 per share. Revenue of $87.7 billion at the midpoint of forecasts is some 4% ahead of what Apple reported a year ago.

At a current price of $314 per share, which gives Apple a $1.36 trillion market cap and is causing analysts to almost have to update their price targets in real time, there is an argument being made that with the advent of 5G mobile phone upgrades, a $2 trillion valuation is not only not implausible, but probable. There’s no end to the growth forecast for Apple’s iPhone.

Tech leader Microsoft also carried a lot of weight for the market index in 2019, having a 4.55% weight and generating 6.6% of its returns. Together with Apple, the two companies accounted for nearly 15% of the total index performance.

Cloud computing and Microsoft’s Azure platform is one of the big reasons it did so well last year, and could easily do so again this time around. There has been a subtle shift by companies away from Amazon on all fronts: Nike and Ikea abandoned its marketplace, and companies are gravitating away from Amazon Web Services (AWS) and finding a home on Azure.

Azure sales were up 59% last quarter, while AWS saw a 35% gain. Having also won a Defense Department contract for cloud services, which Amazon is now challenging in court, Microsoft could see more enterprise-level contract wins, and maybe additional government awards.

Despite increasing government and regulatory scrutiny of its practices, Alphabet had a banner year last year, outpacing the gains of the market. Its weight in the S&P 500 is 3.19%, and though its returns didn’t represent such a large swath of the marker’s performance, it still helped lift the overall total.

New CEO Sundar Pichai is viewed as a positive driving force for the tech conglomerate in 2020, as Alphabet continues to monetize search. Analysts have been raising their outlook for the company as they did with Apple and acquisitions like Alphabet’s just-announced deal for Pointy, which helps brick-and-mortar retailers track inventory in real-time and display pop-up screens for consumers when they search online for a product, could lead to…