Businesses of all shapes and sizes, in all types of industries and across all geographies, are moving their workloads to the cloud. According to Gartner Research Vice President Sid Nag, “At this point, cloud adoption is mainstream… Adoption of next-generation solutions are almost always ‘cloud-enhanced’ solutions, meaning they build on the strengths of a cloud platform to deliver digital business capabilities.” Nag goes on to say that by 2022, 60% of organizations will use an outside managed cloud platform — good for double the percentage of companies that used outside cloud vendors just in 2018.

It’s no wonder then that cloud-based infrastructure and software companies have been some of the hottest parts of the technology sector these days, with many cloud-focused stocks trouncing the market’s returns.

Though the calendar has now flipped to 2020, I wouldn’t expect the trend to slow down any time soon. Here are three cloud-focused stocks that look like good bets in January.

In terms of cloud infrastructure leadership, search engine leader Alphabet (NASDAQ:GOOG) (NASDAQ:GOOGL) has been a laggard, behind leaders Amazon.com (NASDAQ:AMZN) and Microsoft. However, the search engine’s fortunes could be changing in 2020. Alphabet has been making heavy investments in its Google Cloud platform over the past year, with the company hiring Oracle veteran Thomas Kurian in late 2018 to get its cloud platform and sales force up to par.

Pivotal Research analyst Michael Levine believes that 2020 will be the year that Kurian’s efforts will come to fruition, with Levine recently raising his price target on Alphabet from $1,445 to $1,650, compared with just a $1,400 stock price today.

Alphabet doesn’t report its cloud revenue on a stand-alone basis just yet, instead grouping it with its hardware and app store sales in a category called “Google Other.” Last quarter, that segment grew 38.5% to $6.4 billion, though it’s highly likely that Cloud grew much faster than the overall category.

With CEO Sundar Pichai now fully taking over from Google’s founders Larry Page and Sergey Brin, who are stepping back from their previous management duties, and with Kurian now with more than a year under his belt at Google’s cloud business, 2020 could be the year that Alphabet’s cloud makes a bigger splash in the market. At the same time, strong growth is still coming from Alphabet’s core search advertising business and from YouTube. Finally, Alphabet’s new $25 billion buyback program, announced on its second quarter 2019 earnings call, should add another tailwind to shares this year.

While the cloud infrastructure challenger Alphabet is poised for a good 2020, investors shouldn’t ignore the cloud pioneer and market leader, Amazon. Though Amazon has been a massive long-term winner, it actually lagged most of the other big tech names in 2019, as well as the market overall — though it still eked out a nice 23% gain. Usually, when Amazon lags for a period of time, it’s a good time to buy. 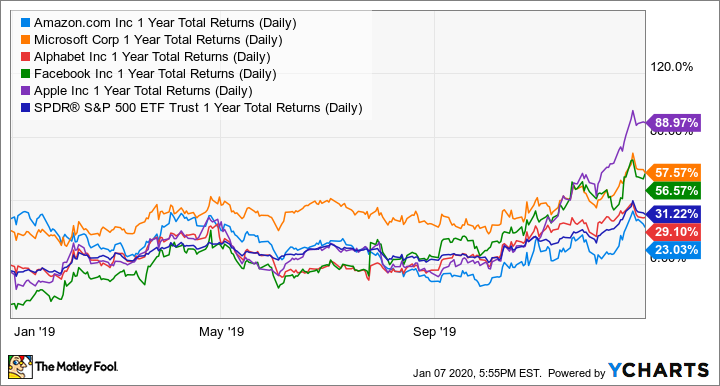 Why might Amazon do better in 2020? Likely because of the massive investments it made in 2019, across both its Amazon Web Services (AWS) cloud and e-commerce platforms. Amazon made the bold move to one-day shipping for its Prime customers in the spring of 2019, leading to a reacceleration in growth in its direct e-commerce business. At the same time, AWS decelerated slightly but still posted impressive 35% growth in the recent third quarter. As revenue was decelerating, management aggressively ramped up investments in its cloud infrastructure, R&D, and sales forces — much more so than in 2018, a lighter investment year.

Amazon doesn’t have a preconceived notion of its investment cycles, but invests according to the long-term opportunity and when it makes sense for the business. Though the market was a tad nervous about Amazon’s aggressive spending and margin compression in 2019, I’d expect the company to reap the fruits of those investments in 2020 and beyond, just as its 2018 benefited from its large 2016-2017 investment cycle…