These are trying times we will remember for decades to come. And it’s important to acknowledge the human tragedy as the world deals with this crisis. Consequently, sentiment in stocks (even in the big tech stock names) soured to extremes on both Main Street and Wall Street.

Social distancing and quarantine measures have created a colossal problem for businesses all over the world. All gross domestic product (GDP) estimates until this point are now useless. The forecast went from growth to recession in the blink of an eye. Tech stocks have shown some relative resilience, but after all’s said and done, no business will avoid suffering big losses this year.

Nevertheless, in today’s write-up we share some upside potential in technology stocks. Rather than scraping the bottom of the proverbial barrel, it’s more constructive to concentrate on the top three competitors in their industries. When the recovery rally comes, these stocks will lead the way.

Although, I can confidently say that we are in a bottoming process, this is not the same as picking the bottom. This won’t be a point in time but rather an effort to stabilize, and this starts by having less volatile days in the stock market. Clearly we are not there yet.

Swinging from +5% to – 5% in mere minutes cannot be the end of this correction. Investors need the pendulum to slow down and volatility to abate. This return to stability will only come with increased information on the virus front.

Now that countries are accelerating Covid-19 testing, infection numbers are ballooning. Hopefully death rates will slow — welcome news for a weary-eyed society. As it stands, the medical community is making great headway in developing a Covid-19 vaccine and therapeutics to treat the disease.

After all the medical reading the public has done lately, we’ve nearly earned a degree in virology!

With some light ahead in the tunnel, there are a few opportunities to consider in the market, such as Microsoft (NASDAQ:MSFT), Salesforce (NYSE:CRM) and Alibaba (NYSE:BABA).

These have been the best technology stocks of the recent past and will continue to be in the future. Investing in them on giant dips makes sense right now, but I would still advise against giant size trades.

We still have too many unknowns in the market, so minimizing risk is paramount until more answers emerge. The market still has plenty of potential to be violent.

Tech Stocks to Buy After the Crash: Salesforce (CRM) 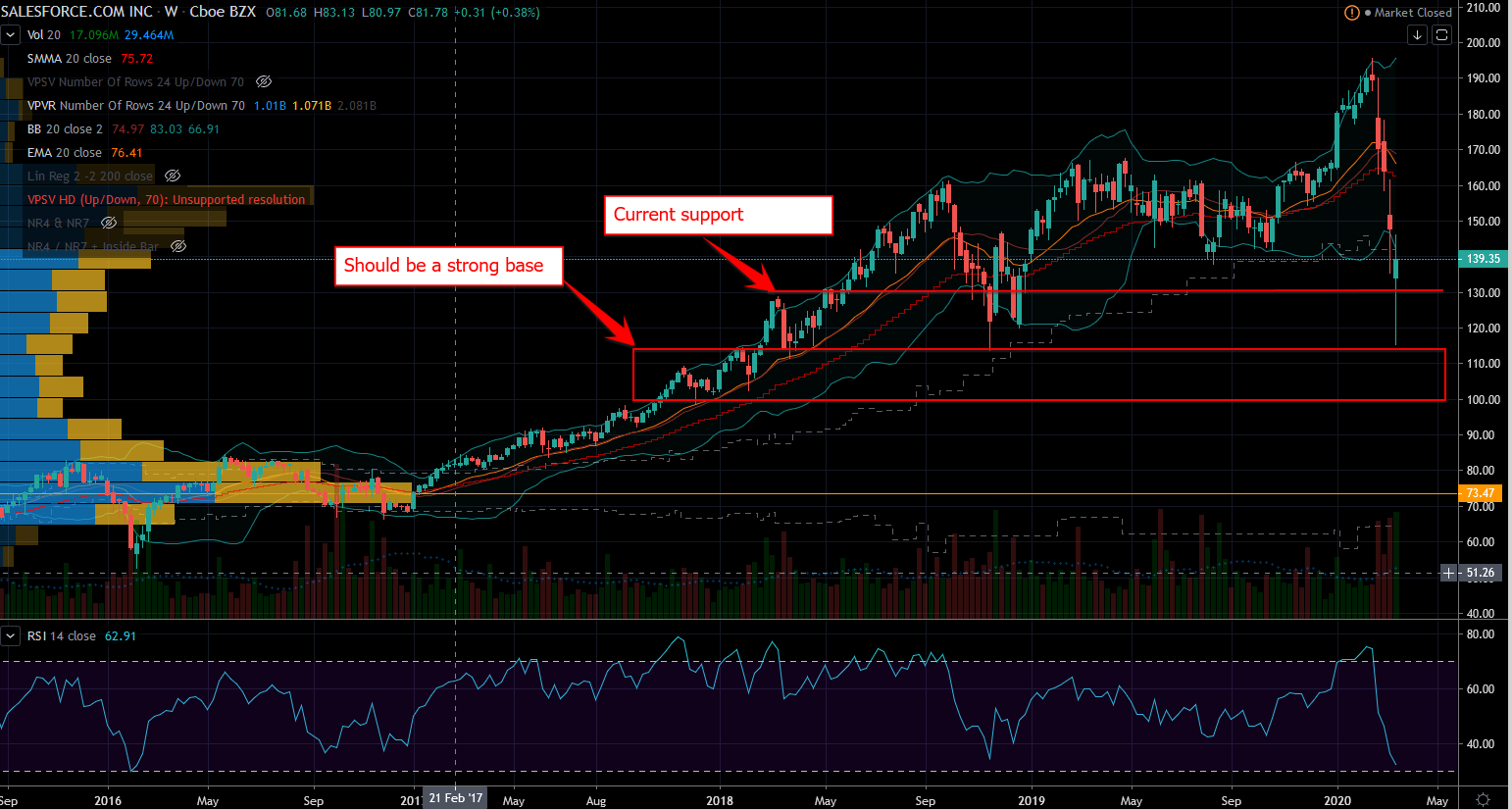 There will be good to come out of the coronavirus crisis. For decades the world has been striving to increase remote work. Now with many local governments issuing stay-at-home orders, the process will force a giant leap forward in that direction. Specifically, it will kick into high gear the migration to the cloud campaign. The good news is Salesforce is there already.

In its early days, Salesforce battled the behemoth Microsoft, and won. Since then, it has been setting growth records under the leadership of Marc Benioff. This is important to note because he is now back as sole CEO of CRM after a brief interruption last year. So the company is back in the hands of its best general.

This side benefits of accelerated cloud movement will directly benefit Salesforce for the longer term. Companies are scrambling to sign up with cloud services. While this may be a temporary necessity, it will create habits for many far past the threat of this contagion. Businesses will find ongoing uses for services like this and they will become part of daily mode of operation for ever. Meaning that out of necessity, corporations will finally be able to make the telecommuter concept a reality.

Even after this correction, CRM stock is not cheap nor will it ever be for as long as it continues to grow as fast as it does. Value isn’t a luxury afforded to Salesforce. The true value in CRM stock is in the company’s ability to repeatedly beat earnings. So the 40% drop from $195 down to $115 is the argument of relative value but not in absolute terms. It still sports a nauseating price-to-earnings ratio. The simplest way to say this is that when the stock market recovers, CRM will be leading it up. So nibbling on some this week is a valid investment idea. 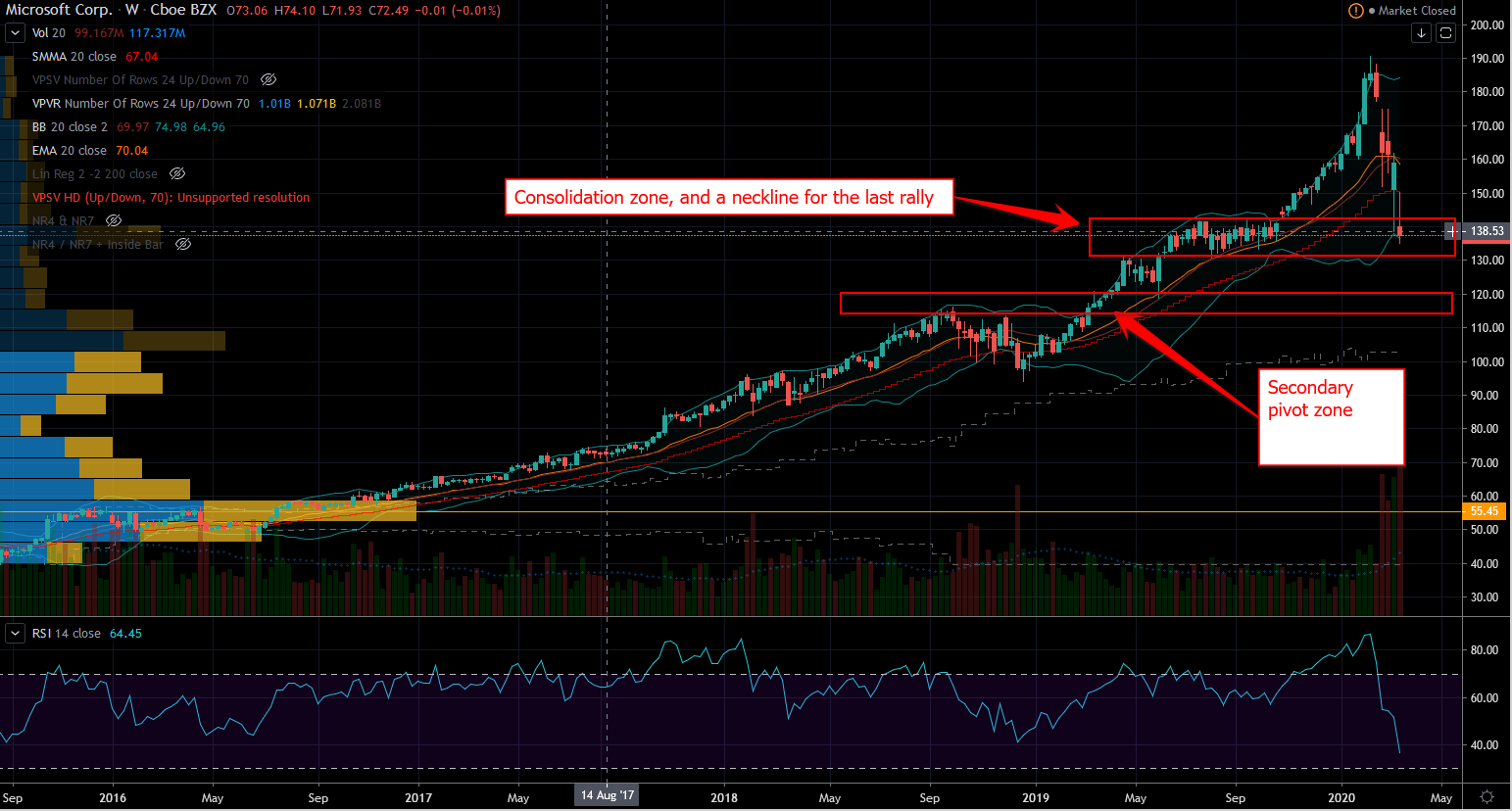 Microsoft is a dinosaur tech giant who has recently evolved and grew wings. Under the leadership of Satya Nadella they made the turn into the new cloud technology reality. It was touch-and-go for a long while but they finally committed and succeeded in adopting the subscription model for the future. Wall Street likes what it sees so they will give it the benefit of the doubt.

MSFT stock will recover in the next few months and it too can resume its rally. There are no intrinsic problems to it so I expect savvy investors to pick it up on the cheap. This is not to say that it can’t get cheaper in the next few days. After an incredible rally that topped out in February, MSFT fell 30% so this puts the stock in stronger hands. Sharp corrections are sometimes necessary especially after an exponential upside explosion in price. Stocks need to shake out the weak hands before it can build further upside.

Steady rallies are generally better than what we had earlier this year, but for what ever reason investors bought stocks up in panic and this here is the flip side of of the phenomenon. Covid-19 headlines may have have been the trigger for the correction but the process was imminent. The ones who pay the costliest price are those who started chasing late and did not set proper stop loss levels.