A government contractor Stifel deemed “The Terminator” could be one of the best bets to lead the market back after the coronavirus sell-off, according to Wall Street analysts.

Analysts have been getting behind Leidos as the outbreak has spread around the world. In the last three weeks, Wells Fargo and Stifel upgraded the stock to buy. Argus hiked its price target to $135 per share from $92, citing a strong fourth-quarter. JPMorgan made it one of five information technology companies in its “COVID-19 Outperformers Basket.”

Leidos, which has a market cap of about $15 billion, is an information technology company that gets a large chunk of its revenues from the defense and health care sectors. It has made some big acquisitions in recent years, including buying information systems segment of Lockheed Martin in 2016 for about $4.6 billion and a $1.65 billion deal for Dynetics that closed earlier this year.

The coronavirus outbreak, which has led to a dramatic market pullback amid concern about the economic impact it could have, may actually lead to longer-term growth for Leidos, Stifel said in a note to clients.

“We see Leidos’ as positioned to benefit should the outbreak lead to a broader re-evaluation of public health preparedness given its positioning within the CDC, NIH, and Defense Health Agency,” Stifel said.

According to FactSet, 55% of analysts have buy ratings on Leidos, and none recommend selling the stock. The stock certainly has not been immune from the recent volatility in the market, but it is still up nearly 7% for the year. 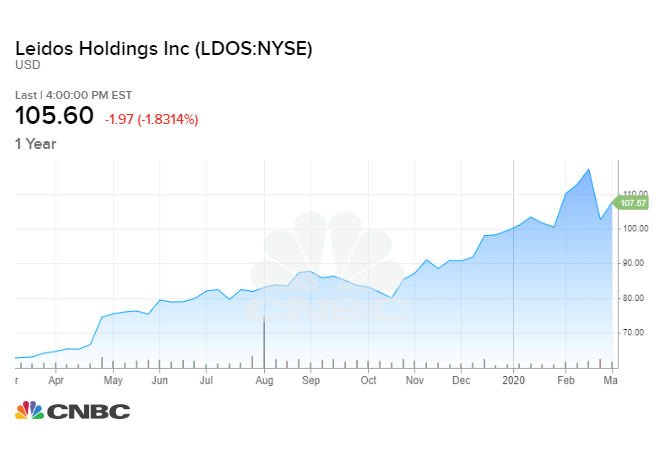 The stock’s average target price is $121 per share, according to FactSet, 14.5% above where trading closed Friday.

Over a slightly longer time frame, Leidos is smoking the broader market. The stock is up over 60% in the past 52-weeks, putting it neck-and-neck with Apple, the best-performing stock in the Dow Jones Industrial Average last year.

The company has won some large government contracts, including a $7.7 billion contract from the U.S. Navy, though a competitor is still challenging that contract.

Analysts believe that the recent success should continue, with Stifel saying, “The duration and breadth of Leidos’ success in this regard gives us confidence that it’s not an anomaly.”

The company’s government contracts “should provide strong visibility to accelerating revenue growth potentially for the next 2yrs+,” Wells Fargo said in a note.

It is also coming off a better-than-expected fourth quarter. Leidos reported…