Chip designers Advanced Micro Devices (NASDAQ:AMD) and NVIDIA (NASDAQ:NVDA) have been crossing proverbial swords for decades. They form a nearly unchallenged duopoly in the market for computer graphics processors, and the same chips can also churn through other types of advanced math problems at impressive speeds.

The two companies may look almost identical to a casual observer, but AMD and NVIDIA stand worlds apart when seen through a seasoned investor’s lens. Let’s take a look at the key differences between these companies, and then I’ll show you which one you should buy today.

NVIDIA is a much larger business than AMD at the moment, and it’s been nearly a decade since AMD could match NVIDIA’s profit margins: 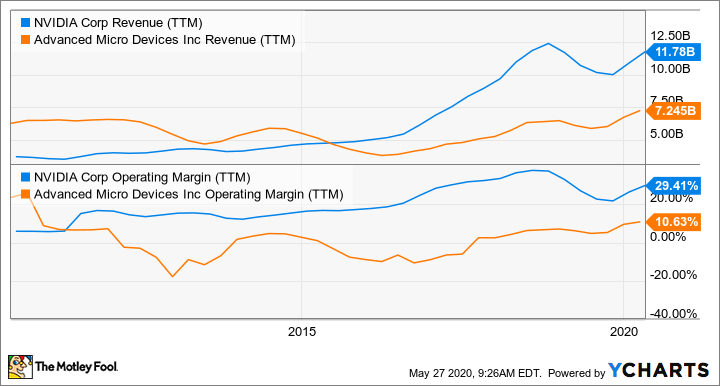 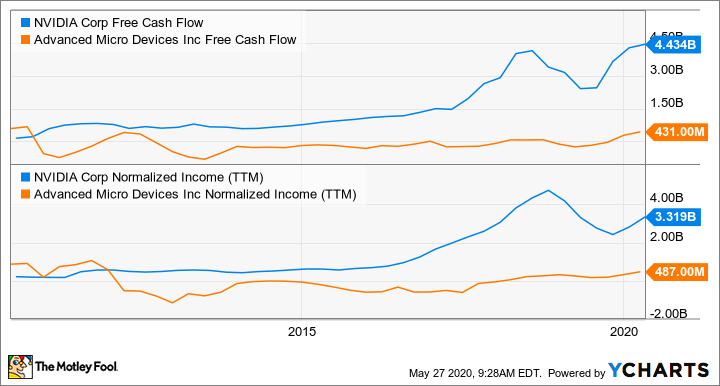 NVIDIA’s sales growth stems from success in the data center. The company’s data center sales increased by 80% year over year in last week’s first-quarter 2021 report. This market accounted for 37% of NVIDIA’s total revenues in the first quarter, up from 29% in the year-ago period and a mere 8% two years ago. NVIDIA’s data center ambitions are paying dividends and will accelerate in the coming quarters as the $6.9 billion buyout of data center networking specialist Mellanox starts to bear fruit.

Most of AMD’s revenue growth for the same reporting period came chiefly from desktop and notebook processors. AMD gets to double-dip in these markets as a major provider of both Ryzen system processors and Radeon graphics chips. Notebook sales spiked due to work-at-home orders under the COVID-19 health crisis. Looking ahead, AMD expects semi-custom chip sales to sure in the second half as both Sony (NYSE:SNE) and Microsoft (NASDAQ:MSFT) are launching new gaming consoles built around AMD’s products.

Which stock should you buy today?

Both of these stocks have held up very well during the coronavirus pandemic. AMD’s shares have gained 16% year-to-date while NVIDIA’s stock price increased by 48% and both have more than doubled over the last year. Investors clearly expect the good times to keep rolling.

As a result, we’re looking at…