Speculative traders are betting big that Tesla won’t be the only successful company of the future named for inventor Nikola Tesla.

Shares of Nikola Corporation, which makes battery-electric and hydrogen-electric trucks, jumped more than 20% on Tuesday shortly after the open, before reversing course and plunging more than 20%. At that point, trading was paused for volatility.

On Monday, the stock more than doubled.

The company began trading on June 4 after a reverse merger with VectoIQ, which is a publicly-traded special purpose acquisition company headed by former vice chairman of General Motors Stephen Girsky. The deal was announced in early March.

Part of Monday’s surge was due to CEO Trevor Milton announcing a reservation date for the company’s upcoming Badger truck. His tweet follows a previous statement by the company that it would need to partner with an established OEM in order to bring the Badger to market.

We open up reservations for the most bad ass zero emission truck on June 29th. See the @nikolamotor Badger in person at #nikolaworld2020 this year. You’ll get to see a real operating truck, not a fake show truck. Expect stamped metal panels, functioning interior w/ hvac, 4×4, etc

604 people are talking about this

The stock’s surge is despite the fact that Nikola, which was founded in 2015, doesn’t expect to generate revenue until 2021, and shows the dispensation investors are willing to give to companies that promise vehicles of the future. Tesla has yet to turn an annual profit, but shares have surged 127% this year. Hydrogen fuel cell makers Plug Power and Bloom Energy have also seen their stocks pop in the past as investors rush into these greener fuel alternative names.

Fuel cell technology combines hydrogen stored in a tank with oxygen from the air to produce electricity, with water vapor as the by-product. It’s been around for decades and while there are machines such as fork lifts that use the technology, it has yet to become mainstream due to cost, among other things. 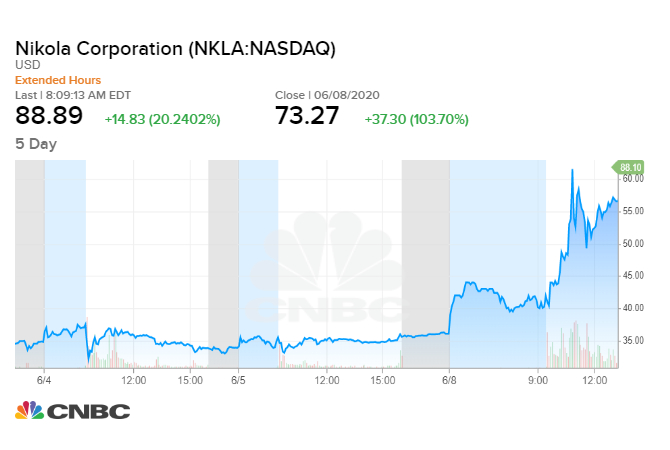 Nikola said that its pre-orders represent more than…