Demand for 5G smartphones has remained strong even though the overall market has taken a beating in the wake of the novel coronavirus pandemic. According to Strategy Analytics, 5G smartphone shipments of 24.1 million units in the first quarter of 2020 eclipsed 2019’s total shipments of 18.7 million. Global smartphone sales, however, were down 17% year-over-year during the quarter to 275 million units.

Looking ahead, the 5G smartphone market is expected to be the bright spot in an otherwise dull industry. Global smartphone sales are expected to drop 25% in 2020 as per Strategy Analytics’ estimates, but 5G smartphone shipments are expected to jump to 199 million units. Now, the effects of the COVID-19 outbreak may slow down the adoption of 5G smartphones in the near-term, but the sunny forecast indicates that we are at the beginning of a new generation of mobile devices.

As such, now may be a good time to load up on stocks that could take advantage of the transition to 5G smartphones. Cirrus Logic (NASDAQ:CRUS) and Synaptics (NASDAQ:SYNA) are two such tech stocks that could win big from the 5G revolution, and they look like good picks right now despite being hammered so far this year. Let’s see why. 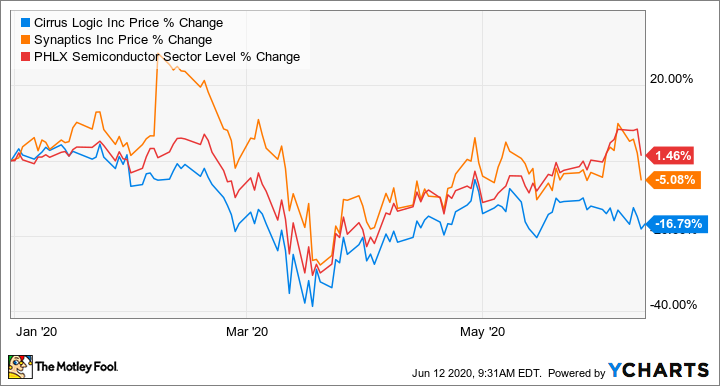 1. Cirrus Logic is sitting on a big opportunity thanks to its largest customer

Cirrus Logic is primarily known for supplying audio codecs to Apple (NASDAQ:AAPL). The iPhone maker accounted for three-fourths of Cirrus’ revenue last quarter, so its 5G fortunes are dependent on Apple to a very large extent.

That may look like bad news for Cirrus Logic at first, as there have been reports that Apple may delay its 5G smartphone because of COVID-19. The good part is that the delay isn’t expected to be big enough to rattle either Apple or Cirrus.

Cowen analyst Krish Sankar predicts that Apple’s next-generation iPhones could be delayed by a month or two, according to a research note seen by AppleInsider. The investment bank adds that Apple could launch four 5G models around the fourth quarter of the year, in line with what other noted analysts have said earlier.

This indicates that Apple is planning to cover a wide range of price points to tap into the 5G gravy train. That could be a smart move because Wedbush Securities analysts say Apple has an installed base of at least 900 million iPhones and over a third of them are expected to make the move to 5G.

Cirrus’ heavy reliance on Apple means that the chipmaker could be a direct beneficiary of the latter’s move into 5G, especially considering that the smartphone giant is expected to dominate the market despite being late to the game.

This is why now may be a good time to take a closer look at Cirrus Logic stock, as it trades at a reasonable valuation. Its price-to-earnings (P/E) ratio of 27 is lower than 2019’s P/E of 42, while the forward P/E ratio of 22 points toward bottom-line growth. Additionally, Cirrus Logic has a debt-free balance sheet and $600 million in cash.

The company has done well to resist the novel coronavirus-induced weakness in the smartphone market so far. It delivered 16% annual revenue growth for the quarter that ended on March 30, while net income was up nearly 65% year over year. And as we approach the second half of the year, Cirrus may be able to sustain its double-digit growth once Apple’s 5G iPhones go into production.

Synaptics is also touted to win big from this year’s iPhones as all the devices are expected to rock OLED screens. The chipmaker has been supplying OLED touchscreen controllers to top tier smartphone OEMs (original equipment manufacturers) for the past few months. It recently pointed out that it expects at least 10 additional flagship and mid-range smartphones equipped with its OLED solutions to hit the market this year.

Synaptics also provided a hint on its recent earnings conference call that it is supplying chips to Apple for its entry-level iPhone SE. In the words of CEO Michael Hurlston, the company’s “large handset customer launched their highly anticipated low-end LCD smartphone last month using our DDIC.” So, it won’t be surprising to see Synaptics…