The novel coronavirus has infected more than 14 million people across the world, and nearly 600,000 people have died from COVID-19 as of July 18, according to a Reuters tracker. But the worst may be ahead of us according to the latest warnings from leadership at the World Health Organization.

For instance, coronavirus infections in the U.S. are spiking once again, and a similar trend is taking place in Eastern Europe. Shelter-in-place orders and lockdowns are also making a comeback in certain countries such as India. We have already seen how such developments can affect the stock market, which underwent a massive correction in March this year, so the chances of another plunge should not be ruled out.

In that case, investors should take a closer look at NVIDIA (NASDAQ:NVDA) and Glu Mobile (NASDAQ:GLUU) — two stocks that have thrived amid the uncertainty as their businesses have benefited from the lockdown measures that have become common across the world. 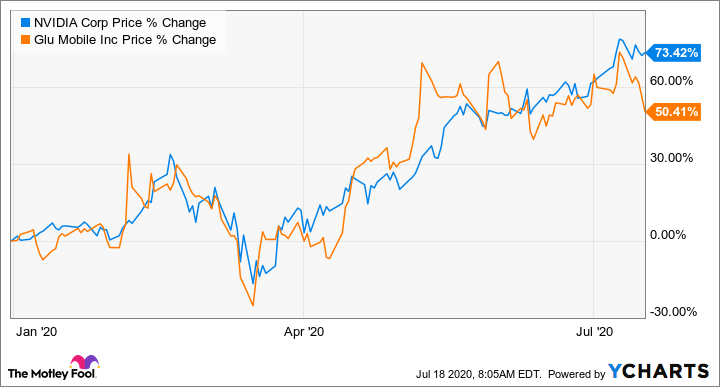 1. NVIDIA is riding multiple tailwinds tied to the pandemic

COVID-19 has failed to dent NVIDIA’s momentum in 2020. In fact, demand for NVIDIA’s graphics cards may have increased in these uncertain times, according to its results for the fiscal first quarter ended April 26.

The graphics specialist’s revenue shot up 39% year over year, while adjusted net income increased 106%. NVIDIA delivered the terrific gains thanks to growth in its video gaming and data center businesses.

The latter recorded 80% growth to $1.14 billion, accounting for 37% of total sales. The company witnessed strong data center demand throughout the quarter, according to comments made on the earnings call. NVIDIA management also added that the data center business enjoys strong visibility in the current quarter, and the company remains confident of its prospects in this space thanks to the new A100 GPU (graphics processing unit).

The A100 data center GPU is based on NVIDIA’s latest Ampere architecture. The company claims that its performance is nearly 20 times faster than its predecessor, so it isn’t surprising to see several big cloud players already lining up to deploy the A100. According to NVIDIA CFO Colette Kress:

The A100 will be deployed by the world’s leading cloud service providers and system builders, including Alibaba Cloud, Amazon Web Services, Baidu Cloud, Dell Technologies, Google Cloud Platform, HPE, and Microsoft Azure, among others.

This indicates that NVIDIA’s data center momentum isn’t going to die down anytime soon. The same can be said about the gaming business, which produced 44% of the top line last quarter. Gaming revenue was up 27% year over year, but that rate of growth should accelerate near term as the company is set to launch a new generation of graphics cards.

Spending on video game hardware has increased during the pandemic as people look for ways to keep themselves entertained. Moreover, the next generation of video games is expected to be even more graphics-intensive as developers aim to deliver a life-like experience. This creates an ideal situation for NVIDIA to supply its latest generation graphics cards as most of its customers are currently using older hardware that may not be capable of running the latest titles.

Given 80% of NVIDIA’s overall business comes from these two core segments, both of which have proved resilient in the face of the coronavirus, the company is poised to outperform should the outbreak force world leaders to reinstate strict lockdowns and social-distancing guidelines.

While NVIDIA’s graphics cards are aimed at enthusiasts and players with deeper pockets, Glu Mobile gives consumers a cheaper way to keep themselves engaged. They can simply download one of the company’s several titles on their mobile device to play without having to invest in dedicated hardware.

Not surprisingly, demand for mobile games has increased dramatically amid the pandemic. According to a third-party estimate, revenue from mobile games is expected to jump to $97 billion in 2020 from $58 billion last year — a massive increase of 67%.

Glu Mobile has enjoyed a nice shot in the arm thanks to this rapid growth. The company raised its full-year bookings guidance twice this year as its…